Elise Yvonne Rousseau established her conservation studio over 20 years ago, first in her San Francisco apartment and later, as the business developed, in three separate specialized studios. Her new location consolidates all the services she offers under one roof. Elise and her staff of assistants and interns work to conserve, preserve, clean and repair an extremely wide range of textiles, including (according to her web site http://artconservationderigueur.com/): ‘Historic Objects, Period Furniture, Antiques, Decorative Arts, Sculpture and Ephemera from private and museum collections.’

Conservation, as defined on her site, includes ‘the application of technical, scientific, and artistic analysis to the preservation and treatment of historical objects and artifacts. The society members were shown a vast range of the fascinating restoration and preservation projects currently conducted at the studio. 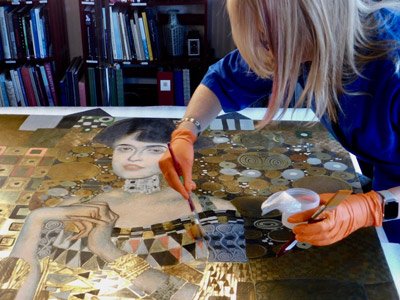 Highlights of our tour included viewing the progress on an immense restoration project for the iconic Clift Hotel, located near Union Square in San Francisco. The hotel’s art deco bar, the Redwood Room, paneled with the wood of a single redwood tree in 1933, originally displayed six large copies of Klimt paintings. The paintings, now covered in layers of dirt and grime, have been in storage for years since the hotel was modernized in the early 2000s. Elise and her team are painstakingly cleaning and restoring the panels to their original shine. They will be returned to the Redwood Room for the grand opening this spring.

Another highlight was the opportunity to see French Haute Couture dresses from the 1950s and 1960s in various stages of restoration, each carefully spread flat on a large table and covered with muslin.

These beautiful gowns included a white chiffon silk with rhinestones and surface embroidery Balenciaga, circa 1960, and three Christian Dior Gowns, caramel satin silk, ice blue chiffon, and scarlet, all circa 1950s. The oldest dress, an emerald green silk crêpe panel handkerchief slip dress with picot finished edges, circa 1925 was attributed to Madame Vionnet but proved to be a dressmaker’s copy.

The dresses were undergoing surface cleaning to remove stains and areas of discoloration. Tears and splitting seams will also be carefully hand repaired. After the work is completed, each garment will be archivally re-housed for long term storage in acid-free tissue linings and museum boxes.

In addition to work in the studio, Art Conservation de Rigueur offers on-site restoration. She has been very busy with disaster relief including damage done by floods, insect infestation, mold, and recent wildfires.

Elise shares her expertise by training many interns who have gone on to work at museums and start their own business.